Hurricanes formed in the same style as Superstorm Sandy could hit Europe by the end of the century because of climate change, new research has found.

Rising sea surface temperatures in the Atlantic will spread east creating conditions for hurricanes that head towards Europe rather than the USA.

The study led by Reindert Haarsma of the Royal Netherlands Meteorological Institute (RNMI) found that hurricanes could form in the tropics before weakening to storm status as they head north.

The turbulent conditions where cold polar air meets warmer air, the baroclinic region, would then join the storm and reinforce it. This could cause some systems to regain hurricane force before making landfall in Europe. 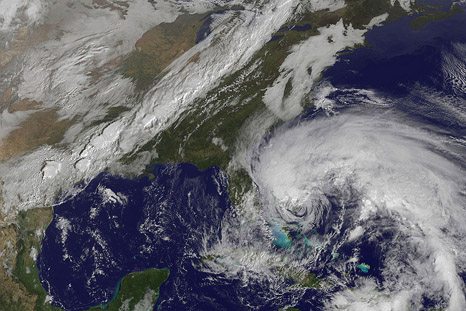 Hurricane Sandy’s 2000 mile cloud extent on collision course with the strong cold front over the Eastern US. The same process could create European hurricanes in the future (Source: Flickr/NASA Goddard)

Similar conditions created Superstorm Sandy last year, hitting New York after sweeping through the Caribbean as a hurricane. The recharged storm did not quite reach hurricane status again before slamming into the US coast.

“Such revived hurricanes are known to cause widespread damage along the North American east coast in the current climate,” writes Haarsma’s team in the paper published in the journal Geophysical Research Letters.

“Our model simulations suggest that tropical hurricanes might become a serious threat for Western Europe in the future. Hence, we anticipate an increase in severe storms of predominantly tropical origin reaching Western Europe as part of 21st global warming,” they claim.

The researchers used a high resolution climate model for the study but acknowledge that it performs poorly when testing the duration of the most severe storms. This could lead to an underestimate in the current research of the number of days with hurricane condition in each season.

The study predicts a European hurricane season  in Autumn for the North Sea and off the West coast of France. Hurricanes would be more likely in winter for Norway and the UK.

By the end of this century, Europe could face 17 hurricane force storms in each annual season.

Hurricane Sandy is estimated to have killed almost 300 people and caused $50bn of damage.