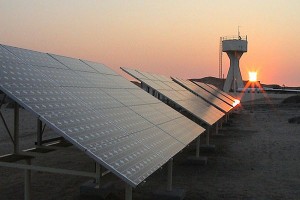 Court rules in solar industry's favour but bigger hurdles are on the horizon (Source:Wiki/GbbIT)

The UK Government has lost its appeal this morning against a ruling that deemed its retrospective changes to solar power tariffs unlawful.

While solar industry bosses have welcomed the decision, there are concerns over changes to other parts of the subsidy’s structure.

“It means that the government can’t mess us around and bring in retrospective cuts that undermine the whole industry. Had the government won, it would have had huge implications for this scheme and would have set a precedent for other schemes too.”

Despite today’s win however, Robb said there are bigger challenges ahead.

The Department for Energy and Climate Change’s (DECC) consultation document includes a condition that buildings receiving the higher solar tariffs, have an energy efficiency rating of C or better in the Energy Performance Certificate (EPC) system.

“DECC have predicted [the EPC proviso] would kill [the industry]. It’s almost like they have set out to kill it,” said Robb.

“The threat of the EPC is the bigger issue. DECC’s own figures have said that the EPC requirement will cut the solar industry by 95%. Only 14% of houses are rated at C or better and most would have to spend around £3000 to reach that level,” said Robb.

The results of the consultation will be out before February 8.

The original conflict surrounds the proposed new tariff of 21p per kilowatt-hour, reduced from 43p, which was expected to come into effect from 1 April 2012.

But on 31 October 2011, the DECC announced a 50% reduction in payments to households and communities generating electricity through solar power. The government said it would be paid to anyone who installed their solar panels after 12 December.

Friends of the Earth and two installers HomeSun and Solar Century took the government to court and won, triggering today’s appeal.

“Today we have reminded Government that it will be held to account when it acts illegally and tries to push through unlawful policy changes. We would much prefer not to have taken this path but Ministers gave us no choice. Our hope now is that we can work together again to restore the thriving jobs rich solar sector that has been so badly undermined by Government actions since October.”

The Government was refused a further appeal with the Supreme Court although there is speculation that they may lodge a new appeal independently.

“The Government must now move on and deliver a Feed in Tariff which is fair and not just for the rich,” said HomeSun CEO Daniel Green.

“This means, dropping the so called ‘aggregator tariff’, which will discriminate against companies trying to provide free solar or low-cost solar and punish private homeowners that don’t have thousands in the bank. Solar should not be just for the rich.”

“The Court of Appeal has upheld the High Court ruling on FITs albeit on different grounds. We disagree and are seeking permission to appeal to the Supreme Court,” said Chris Huhne, UK Energy and Climate Change Secretary.