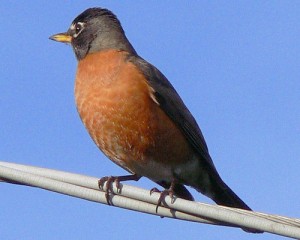 Birds in central California appear to be growing larger to protect themselves from climate change related weather, according to scientists from PRBO Conservation Science (PRBO) and the San Francisco Bay Bird Observatory (SFBBO).

They found that over the last 25 to 40 years, 73 bird species increased in size by 0.02 to 0.1 per cent and say both wing span and body mass were affected.

They study looked at both migratory birds and birds that lived in California their whole lives.

They believe this is due to them storing more fat to help ride out the severe weather events expected to become more common under global climate change, and say this phenomenon could also be affecting the region’s plant growth, leading to a change in birds’ diets.

For example, over the last 25 years, robins have increased about an eighth of an inch in wing length and about 0.2 ounces in mass according to the research published in Global Change Biology.

The new study contradicts previous assumptions that animals and plants are shrinking in size because of climate change.

While the authors say animals can respond to environmental changes could be viewed as good news Nat Seavy, Research Director for the Central Coast at PRBO urges caution.

“Although it is encouraging that species are changing in response to climate change it is troubling that environmental stressors are pushing and pulling on species in diverse ways,” she said.

“What will happen to our ecosystems as some species get larger and others get smaller? We need long-term monitoring to help us understand the impact of these changes.”